The DJI Inspire 1 series drones are the smallest, easiest professional aerial filmmaking platforms in the world. They combine DJI’s unparalleled leadership in aerial technology with world-class M4/3 imaging capabilities. Whether you are a professional photographer or a Hollywood filmmaker, the Inspire 1 V2, Inspire 1 Pro and Inspire 1 RAW are ready to take your work to new heights.

Carbon fiber arms give you the strength to maneuver in the air and they transform, moving out of the camera’s way at the flick of a switch. With a full 360⁰ unobstructed view, you now have the freedom to capture shots independent of the direction you are flying.

The all new 13 inch quick release rotors are built with the unique DJI "Z-Blade" design for aerodynamic efficiency. They have been reinforced with new carbon fiber compound material. This ensure excellent performance with increased stability and optimum flying experience. A newly designed quick-release locking mechanism greatly speeds up rotor mounting. This design also provides additional rotor security and extends the lifespan of the rotors.

Brushless motors pioneered by DJI are now the standard in the multirotor industry. But the Inspire 1 takes the next step in brushless development by integrating curved magnets that fit flush around the edge of each motor. Although much more difficult to produce, these magnets eliminate airflow gaps within the motor, greatly increasing efficiency. Several strands of copper wire have been replaced by a single, dense strand. Reducing the wasted space between wires results in more copper within each motor, providing more power and less resistance. A centrifugal pump increases airflow inside the neat, tight copper windings dissipating heat much faster while greatly increasing the life of the motors.
The new motors increase thrust by over 30% over the original Inspire 1, ensuring responsive and accurate flight even when using the heavier Zenmuse X5 series cameras.

The revolutionary Electronic Speed Controllers (ESC) with sinusoidal drive replaces the square wave drive of traditional ESCs redefining the whole drive system. The patented algorithm in the ESCs have been tuned and customized specifically for the Inspire 1 offering features such as closed loop torque control and distinct functional redundancy with the highest efficiency and the most reliability.

As it flies, the position of your Inspire 1 is constantly updated and recorded using a high-strength, intelligent GLONASS + GPS system. This dual positioning system enables higher precision and quicker satellite acquisition.  This allows you to see where the aircraft is on a live map and giving it a point to hover at when you release the controls.

A fully integrated intelligent battery powers your Inspire 1 and virtually manages itself. When in flight, your remaining battery power is shown live, letting you know how long you can continue to fly. Advanced algorithms calculate the distance of your aircraft and estimated time to return home, letting you know when it’s time to fly back. The battery reports the voltage of each cell, the total lifetime charges and discharges, and the overall health and battery status. All this helps you keep your Inspire 1 in the air and flying for years to come.

This is the "brain" of the entire system. The controller receives thousands of bits of data every second and translating that data into action as you fly. The Main Controller tells every part of your Inspire 1 what to do. It calculates environmental conditions in real-time, ensuring that the aircraft responds to your control commands instantly.

Automatically keeping the Inspire 1 stable and steady during flight only looks easy. This is because the advanced Inertial Measurement Unit (IMU) handles everything. The IMU incorporates both a 6-axis gyroscope and an accelerometer. It monitors miniscule changes in tilt and movement. This allows the aircraft to compensate and adjust immediately, holding its position at all times.

All of these features combine to put your Inspire 1 on autopilot when needed. If the battery runs low or connection with your remote controller is lost, the Inspire 1 uses its positioning system and smart flight technology to return back to you.

Hover In Place Without GPS

You can take off and land at the press of a button and keep your Inspire 1 steady indoors. When  GPS satellites can’t be acquired, the new DJI Vision Positioning System will still control and the Inspire 1 in perfect flight.

DJI built the Vision Positioning System from the ground up, customizing it to meet the rigorous requirements in place for anything that handles position holding on our flying platforms. This system combines visual data and sonar waves in a single unit.  Detecting both variance in patterns on the ground and current altitude. With this information, your Inspire 1 can hover in place and automatically raise or lower its arms as you lift off or descend to land. But the sonar and visual information is just one half of the fully integrated package: processing this information is handled by a dedicated CPU chip. This chip takes in feedback and outputs data in real-time. It is intelligent enough to distinguish between objects and ground patterns. All of this data is given to your Inspire 1’s flight controller, which in turn communicates with the entire aircraft.

The Zenmuse X3 camera, standard on the Inspire 1 V2, shoots up to 4K video and capture 12 megapixel photos. The lens consists of 9 separate elements, including an aspherical element, for extreme clarity, while Adobe DNG RAW support gives you the power to make every shot a masterpiece. The rectilinear, curved lens design eliminates distortion, and the 20mm focal length opens up your shots to a remarkably wide angle without the fisheye look. Packing power into such a small, lightweight design wasn’t easy, but this compact camera shoots video in 4K @ 30 FPS or 1080 @ 60 FPS and takes crisp, clear 12 megapixel photos.

The Zenmuse X5 and X5R are amongst the smallest Micro Four Thirds (MFT or M4/3) cameras ever made and the only MFT camera designed specifically for aerial imaging. Both can capture ultra-clear 4K (3840x2160) at 30 FPS, 2.7K (2704x1520) at 30 FPS, and Full HD (1920x1080) at 60 FPS, in MP4 or MOV format. Crystal clear photos can be captured at 16 megapixels in Adobe DNG RAW format. A higher speed signal readout suppresses the rolling shutter effect when recording, resulting in beautiful footage even when flying at high speeds. The Zenmuse X5 and X5R also comes equipped with convenient features such as Zebra Pattern and Focus Peaking making it a camera that’s truly fit for any job. The Zenmuse X5R is also the first camera of this type able to shoot 4K video in RAW format. With a frame rate of up to 30fps and 1.7Gbps average bit rate (2.4Gbps maximum bit rate) it is the perfect aerial camera for professional filmmaking and post processing. Built inside the Zenmuse X5 and X5R is a powerful MFT sensor that’s absolutely revolutionary for an aerial camera. With a sensor eight times the size of that in the X3 camera included with the Inspire 1, this new MFT sensor enables high quality, high sensitivity image recording at an ISO range of 100-25600. With a sophisticated balance of high-resolving power, accurate gradation, and low noise, you are realizing your artistic and creative vision as never before.

As MFT cameras, you have a choice of lenses and also full wireless control over focus, aperture and more. By utilizing the standard MFT mount, the X5 and X5R is well positioned to benefit from new products and innovations from major lens manufacturers. Currently, these three lenses provide you with a great level of flexibility.

All of DJI's core technologies have been engineered into the Zenmuse X3 gimbal, keeping the camera steady in the sky and ensuring you get stable, professional footage every time. The 3-axis gimbal constantly draws on data fed by the intelligent flight controller, so it knows the aircraft’s flight parameters and computes the proper motion correction every millisecond. Angular velocity, momentum, inertial force and even GPS data allows the gimbal to apply countering power and force, keeping the camera perfectly level no matter how you fly. Such precision is only possible because of the ultra-fast, custom-made processor that is unique to DJI gimbals. Operating at speeds that allow the gimbal to compensate for motion and tilt in real-time, this processor controls motors on all three axes: yaw, tilt, and roll. Brushless motors that run the gimbal are built for higher precision and a longer life, all while handling the stress of flight. They operate at a high control speed of 120°/s for tilt and 180°/s for rotation. You can also control where the camera is pointing with over 360° of rotation and -90° to +30° of tilt, all within ±0.03° of accuracy.

Rotate and tilt the camera by tapping the screen and dragging your finger wherever you want to look. The Inspire 1’s full 360⁰ range is literally at your fingertips, and with one simple motion you can see and record images behind, below, and even slightly above wherever you are flying. The advanced app responds to your commands immediately, bringing a whole new level of control.

As you fly, focus can be remotely adjusted on the X5 and X5R cameras, using the DJI GO app or the separately sold DJI Focus system. Simply plug this new follow focus controller into the Inspire 1 remote to have an accurate, familiar physical focus wheel that controls the way your shots look. 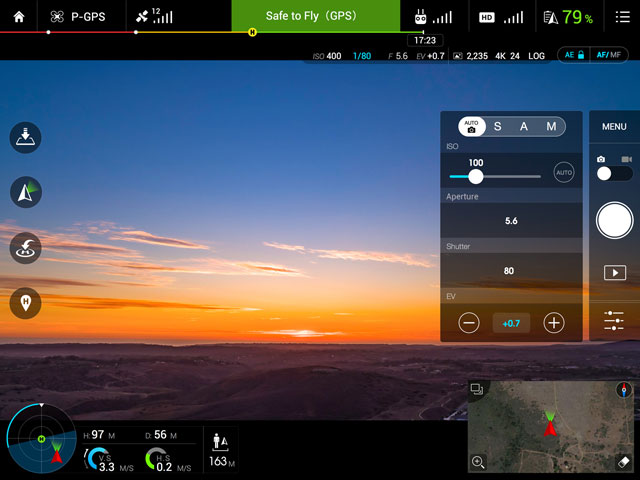 The DJI GO app gives you an unprecedented level of control over your camera and Inspire 1 while you fly. Use the intuitive auto focus mode to compose the perfect shot and change everything from focus to shutter speed and aperture with the tap of a finger. Use the Inspire 1 just like you would use a normal camera, with a shutter button for stills and a record button for video built into the remote control. It also features a jog dial that allows you to change camera settings quickly, and customizable buttons for you to personalize. Plug the optional DJI Focus into the remote control to extend the level of camera control even further with the Inspire 1 Pro or Inspire 1 RAW models. With DJI GO you also control how your Inspire flies, from auto takeoff and landing, to fine tuning of your flying experience or using any of the intelligent flight modes.

From the DJI GO app, you can choose various intelligent flight modes. With these flight modes you can achieve some of the most difficult shots while focusing on camera control.

Select a location or object to focus on, and your Inspire 1 will continuously face it as you fly, or circle around it automatically.

Plan flight paths and your Inspire 1 will fly autonomously on your pre-set route, letting you focus on camera control.

By activating Course Lock, the controls will be set relative to your aircraft's current path. This easy navigation allows you to fly in a set direction as you fly alongside moving objects or across scenes.

Fix your controls to be relative to the Home Point. Simply pull back on the control stick to bring the aircraft back home, or push forward to fly away from home, no matter which way it is facing.

On the Inspire 1 Pro and Inspire 1 RAW models, take control of your focus for the first time, and combine it with aperture control for another layer of creative freedom. Do you want to start on a shallow depth-of-field of your subject and then bring the background into sight? With remote focus control you can, with a tap of the screen inside the DJI GO app. Using the optional DJI Focus system, you can even turn a dial just like you would turn a lens allowing for even more refined control.

Please note that package content differs slightly between models, due to different gimbal and camera configurations.

For the latest software available from DJI, to be used with your Phantom 4, check DJI's website:
www.dji.com 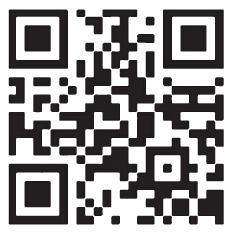 There are no reviews yet.

Be the first to review “DJI Inspire 1 V2” Click here to cancel reply.